While I’m perfectly happy with the H801 LED Strip controller’s abilities, there were a few niggles that I didn’t like:

Knowing the H801 is based on the ESP8266 chip and programmable, I looked for a better solution and finally settled on corbanmailloux solution for the following reasons: 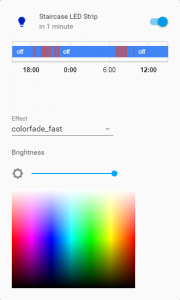 I used the code off the mqtt_esp8266_rgb folder. The only things I had to change in config.h were:

Because I use cloudmqtt, I also changed the MQTT port in the main `mqtt_esp8266_rgb.ino` file:

I followed the instructions on corbanmailloux git page to install Arduino and the relevant libraries, and I used the esptool from micropython to upload the firmware