Following what I think is due to a general OS update, SmartVISU no longer connects to DomotiGa. I’ve tried to fix it, but I’ve thought for a while now to transfer everything over to Home-Assistant since support for IoT devices is much better and update are a lot more frequent

So I’ve finally taken the plunge. One of the main hubs that was used in DomotiGa was the RFXTrx433 Transceiver. I’ve disconnected it from DomotiGa and added it to Home-Assistant. I’ve spend the best part of 2 weekends and several weekday evenings recreating the devices and events that were in DomotiGa. 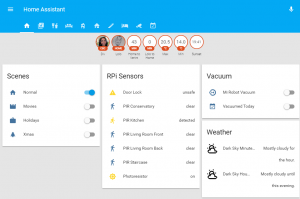 There’s still a lot of work to be done, but I’ve done the most important bits. I’ve also broken down the content on several pages unlike cramming almost everything in one page like I did in SmartVISU.

I’ve also used this an opportunity to save my config to GitHub for back up and in case it helps someone else.

The only thing I’ll be missing as not built-in is the data from my CurrentCost Sensors, but I’ll be running a light version of DomotiGa to send that data to my Home-Assistant setup.